The Blue Flower is a novel published in 1999 by Penelope Fitzgerald (The Blue Flower, Offshore, The Beginning of Spring), based on the life of Friederich Von Hardenberg who later was famously known as ‘Novalis’, the great practitioner German Romanticism, prose writer, poet, philosopher, mineralogist, and civil engineer.

The novel portrays the life of Fritz Hardenberg before he came to be known as ‘Novalis’ and his short yet intensely memorably and incandescent affair with 12 year old Sophie Von Kuhn. 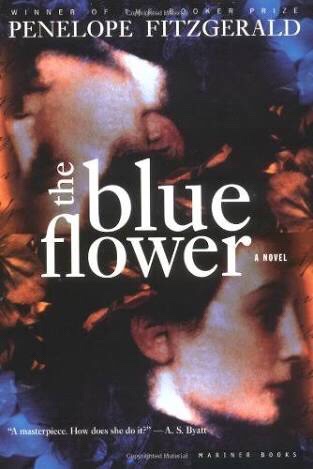 Filled with rich detailing of the romantic era and the astutely well developed characters, each has its own place in the novel, and exists for a reason, as a remnant or a forerunner of some time and space or movement.

The beauty of the novel lies in the prose and the perception of the writer, which go hand in glove with each other, every word is calculated and measured to an extent when all the richness is left in the bowl and all the watery, slimy pulp is thrown into the wastebin. And that is what gives the novel its highly textured and nuanced form.

The novel is a brilliantly easy read with complex themes of the grand novels of the Victorian era such as Pride & Prejudice, Middlemarch, War And Peace, and Jane Eyre, and Great Expectations.

Penelope Fitzgerald writes her sentences with almost acerbic wit and sane humour, but deep inside there lies the simple and melancholic tragedy of life, death, love and loss.

This is a wonderful contemporary novel which captures the essence of 19th century people, literature, families,customs, culture, tastes, attitudes, dressing sense and vocal dialect but I think it is simply the most genuine and the greatest literary analysis of ‘Romanticism and its people’ in a novel form.

Every Character has a voice, a place, a sound, a simplicity and speciality unknown, a dialogue, a flaw and a contribution in this 281 page short novel of manners. The strength of the novel lies in the vigorous character development of Penelope Fitzgerald, she makes sure every character has a life of its own, and all of them reflect different attitudes and tastes of different eras clashing or coming together. For Example, Fritz is the symbol of Romanticism whilst his father Freiherr is a practical man who works in the coal mine industry.

The title of the novel is taken from an unfinished work ‘Heinrich von Ofterdingen’ by Novalis, which contains ‘The Blue Flower’ – it became a leading symbol of German Romanticism. Like the title, the novel is a symphony of the softer side of emotions of life, it celebrates the poetry of human spirit.

‘The Blue Flower’ is an exceptionally well written, thought out, and tightly knit masterpiece of the Romantic Era which pays tribute to the ‘Romantic’ and Novalis, it is a phenomenally intriguing and emotionally satisfying account of a real life signifying the advent of Romanticism. ‘The Blue Flower’ is one of those rare novels which I can seriously ‘love’ and be enamoured of in a hallucinating and addictive fashion. It is an epitome of the word ‘love’ and the especially, the word called ‘life’.

‘The Blue Flower’ is a portrait of the ‘Romantic’ era which is by turns acerbic, sardonic, thrilling, insightful, poetic and ultimately very very sympathetic.